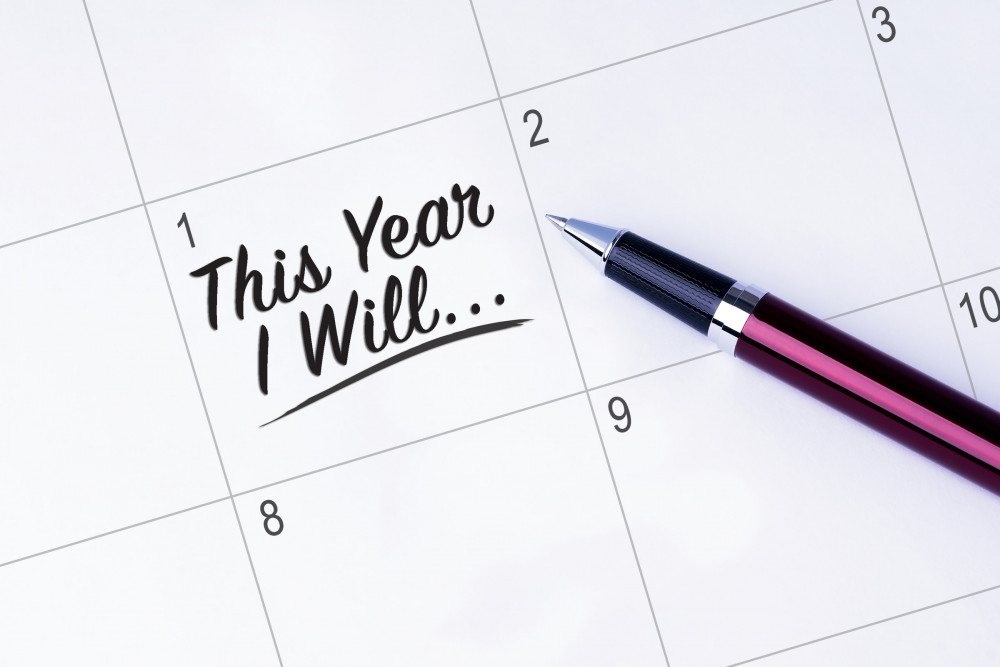 For Goodness Sake Posted on Jan 28, 2018 New Year’s Eve is such an interesting time. The whole world celebrates the fall of one year and the rise of the next. At the stroke of midnight, bleary-eyed partiers in plastic hats plant slobbery sentimental kisses on spouses and everyone hugs in the love-light of the moment. Oldsters, like me, huddle on the couch and eventually – around 9 o’clock, give in and stumble to bed, trusting that the ball in New York City will drop as planned.

New Year’s Eve is a funny sort of holiday. It’s a marker in time, a period at the end that segregates this block of living from the one before and the one in the future. It’s a time to reflect on the past 365 days and become determined to make the next 365 days even better. It’s a time for resolutions. But, declaring you’re going to lose 50 pounds is really embarrassing come the next year. Of course, you can always say, “Lose? No, I didn’t say lose.” It’s also dumb to say you’re going to remodel the kitchen, finish that crocheted tablecloth you started in 1964, become a ballerina, learn to speak Latin, skydive in a bikini, or knit everyone Christmas sweaters for next Christmas.

Maybe we should forget the little things, like climbing Denali, and go for the big one: like, what do you want to be when you grow up. I’m really old and still don’t know what I want to be when I grow up. Age, however, rules out a lot. My back’s too bad to become a gymnast, heavy equipment operator, or a famous alligator wrestler. I don’t see well enough to become a micro-surgeon, although it could be exciting. “Sorry about stitching that severed arm on there backward, Mr. Jones. Hang on and we’ll make an appointment to get that fixed right up.”

You know how grownups are always leaning down and asking young children, “So, Sweetie, what are you going to be when you grow up?” It’s not because they really want to know. They just want to get some ideas.

Most of us never find our niche in life. I’m not sure we even have a niche; we just sort of amble along, taking this path and that until we come to the end. Sometimes careers just happen. We get a job, get some experience, work our way up and pretty soon we have a career.

Years ago I knew a fellow who had a son who dabbled in college much like a fledgling artist dabbles in painting. He tried out the green, didn’t like it, so he played around a bit with the red. Then he decided to become a full time bean washer. A bean washer! He went to work for an espresso place washing beans.

His father, Frank, had at least one degree and smiled at this news, knowing that the kid would come around one day. Someday he’d be just standing there washing his beans and whammo, would know what to do with his life.

One reason Frank was so sure was that he fondly recalled his days as a Peace Corps volunteer in some country deep in the bowels of nowhere. He lived with a tribe where children ran naked and men and women wore little more than loincloths and extravagant tattoos.

There he was, out saving the world instead of his personal future and his father was having a fit. Frank’s father wasn’t understanding at all and would send long berating letters about finishing college, settling down and having a family.

Frank, who felt he was doing something worthwhile for the tribe he lived with, tired of the letters. Finally, he had another volunteer take a photo of him with three comely, near-naked, women and sent it home with a letter. “Dear Dad. I’ve been pondering what you’ve said about settling down. In this country, it is legal for a man to have three wives and I’m considering these three. Love, Frank.”
A letter from home zipped through the mail. “Dear son, I’ve been thinking too. There is really no hurry to settle down. You’re young. You’re healthy. Take your time. Love, Dad.”

I guess maybe my resolution this year is to figure out what I want to do with the rest of my life. Well, besides writing and painting and being a business owner. Maybe take some classes? Get a degree? Become a bean washer? The wonderful and amazing thing is that we can do or be anything…the world is ours for the taking. We just need to stand up and grasp it and hang on for the ride.

Here’s to a fabulous new year!