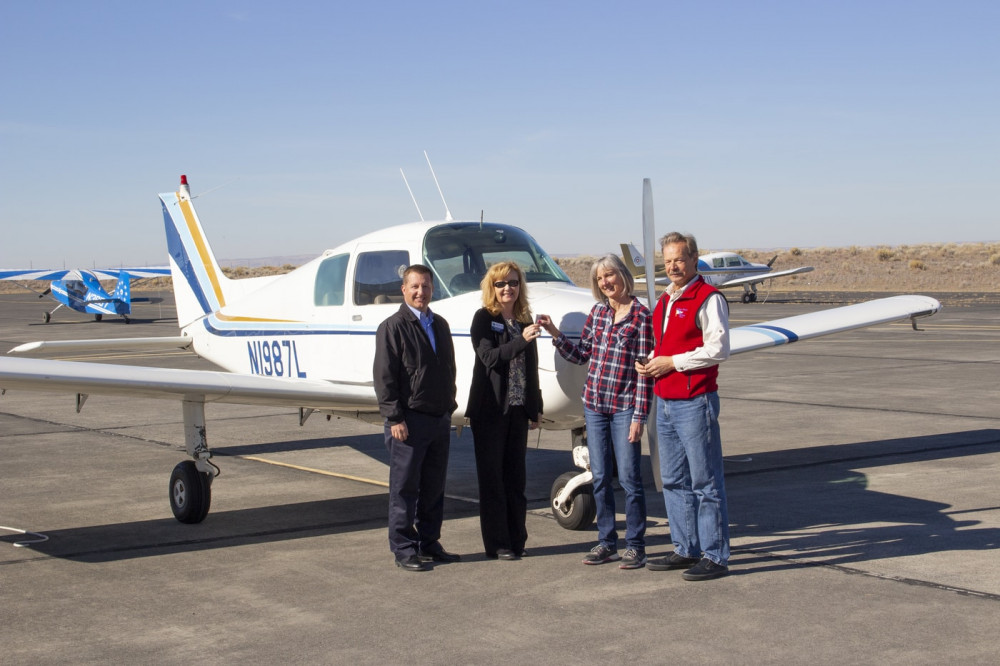 For Goodness Sake Posted on Nov 26, 2018 The Big Bend Community College Aviation Program received an early Christmas present this year in the form of a Beechcraft Sport B-19 aircraft, and Santa Claus came in the form of Kevin and Ann Peterson of Seattle who delivered the plane to the Grant County Airport in October.

The Peterson’s connection to the BBCC Aviation Program began about 20 years ago when they first purchased the airplane. As they searched for an aviation maintenance technician (AMT) that could perform regular maintenance on the Beechcraft, Big Bend and former BBCC AMT David Link’s name kept coming into the conversation.

“I flew over to talk to Dave and his mild manner and the excellent grasp of the airplane informed me that Dave would be able to teach me how best to maintain the aircraft. I would fly the airplane to the Municipal Airport where Dave used his brother’s hangar for the annual. Dave would make me prep the airplane (take off inspection plates, remove panels, etc.) so he could quickly do his magic,” said Kevin. “This was often done with Dave sitting in a lawn chair.

“Dave’s patience allowed me to understand the airplane and anticipate its needs. Best of all I enjoyed his sense of humor and the pride he took maintaining the fleet at the college. I consider Dave one of those rare people who does what he does without the need for egotistic gratification. He is a great person. After talking with (BBCC Chief Flight Instructor John Marc Swedburg), I am not surprised to hear Dave maintained the Big Bend fleet singlehandedly for years.”

Kevin said 1987L (the plane’s tail number) was built in 1976 and purchased by him and his wife in 1999. For the last 20 years, he described the airplane as his second car as they lived on San Juan Island and frequently commuted to Seattle, Portland, and other regional destinations.

As he and wife transitioned into retirement, the airplane’s use reduced. However, before they donated it to Big Bend, their daughter Mari used the 1987L as her trainer. Now, it has found a new home with the BBCC program. “We felt 1987L needed a home where she would be well cared for and returned to her role of training pilots. We considered selling her but realized a private buyer might not provide the care and respect we gave the airplane and it might be abused,” Kevin shared. “Dave (Link) shared the passion Big Bend had for the airplane and how challenging it was to keep the fleet viable now that the airplane is no longer produced.

“So … how could we not donate the airplane to Big Bend Community College? It is not a 100 percent donation as we feel a free gift is never respected and is often thought of as an orphaned giveaway so we asked (Swedburg) if the college would step forward with a small payment. He agreed so we knew the airplane was desirable and would receive decades of care assuring many future pilots will learn to fly in 1987L.”

Swedburg said that is exactly what will happen. “This aircraft will be put to use as soon as our mechanics can complete a thorough inspection and make sure that it meets the standards of our current fleet,” Swedburg said. “Hopefully it will see flights with the students in just a few short weeks.

“We are very thankful for this generous gift to our program,” he continued. “This aircraft not only provides a tool that our students can use to aid in their training but is the best aircraft to train in. The Beechcraft are great aircraft that allow the students to receive skills that will transfer nicely to the next aircraft they will transition to in their careers. This gift will allow us to continue training students with quality aircraft for years to come.”