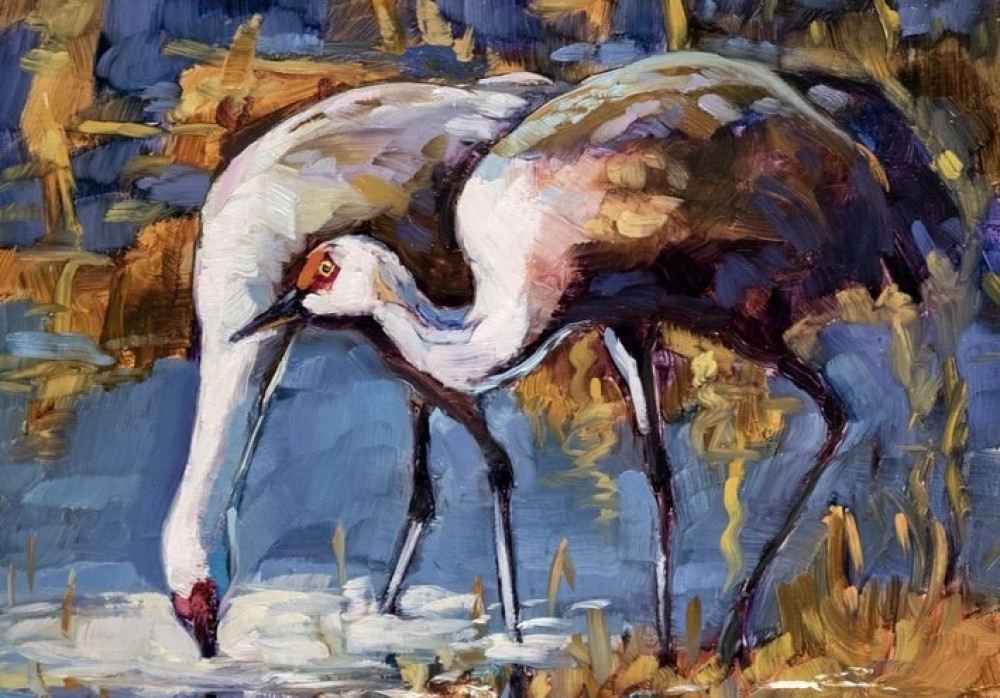 Travel & Leisure Posted on Feb 20, 2020 THIS EVENT HAS UNFORTUNATELY BEEN CANCELLED
Why do they come to Othello? A wildlife wonder, the Sandhill Crane, Grus candensis, returns to the Othello area every year. These large birds (4 feet tall, a 6-foot wingspan), with long necks and legs, migrate in great flocks from their wintering in California, all the way to Alaska. Why do they stop in Othello? A bird guide will tell you they are drawn to safe haven roosting sites by seep lakes, plus lots of feed found in the form of residue grains. Fields of corn stubble are a favorite. They will spend about six weeks in the central part of the Basin, and then they depart.

Description of the Sandhill Crane

Adults are gray overall; during breeding, the plumage is usually much worn and stained, particularly in the migratory populations, and looks nearly ochre. The average weight of the larger male is 10.1lbs, while the average weight of females is 8.9lbs. 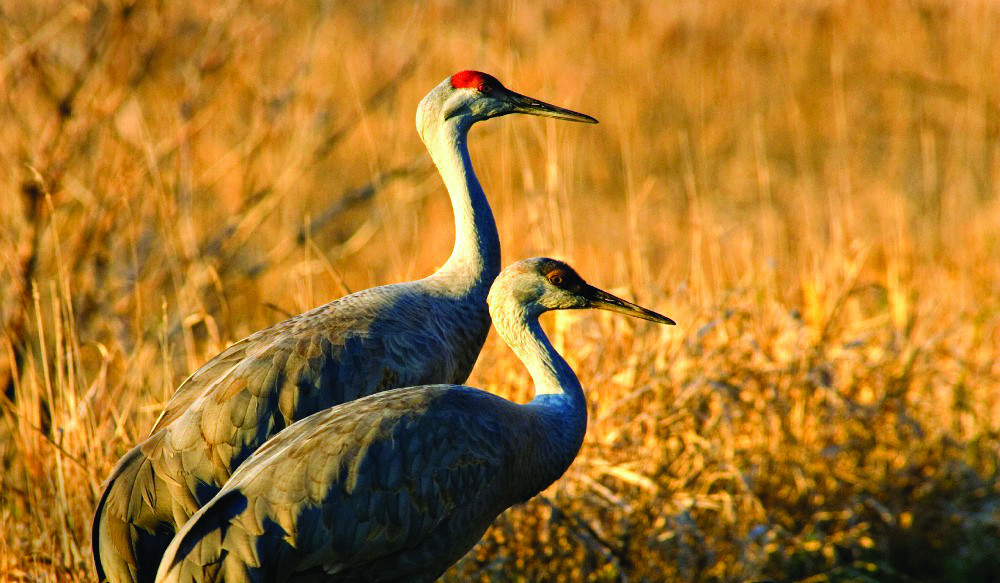 The Sandhill Crane has a red forehead, white cheeks, and a long dark pointed bill. Its long dark legs trail behind in flight, and the long neck is kept straight in flight. Immature birds have reddish-brown upperparts and gray underparts. The sexes look alike. Size varies among the different subspecies. This crane frequently gives a loud trumpeting call that suggests a French-style “r” rolled in the throat, and they can be heard from a long distance.
Mated pairs of cranes engage in “unison calling.” The cranes stand close together, calling in a synchronized and complex duet. The female makes two calls for every single call of the male.

The only other large grayish-bodied bird of North America is the Great Blue Heron. This heron is of similar dimensions to the Sandhill Crane and is sometimes mistakenly called a crane, even though it is very different in plumage detail and build. Like other herons, it flies with its neck tucked toward the body. 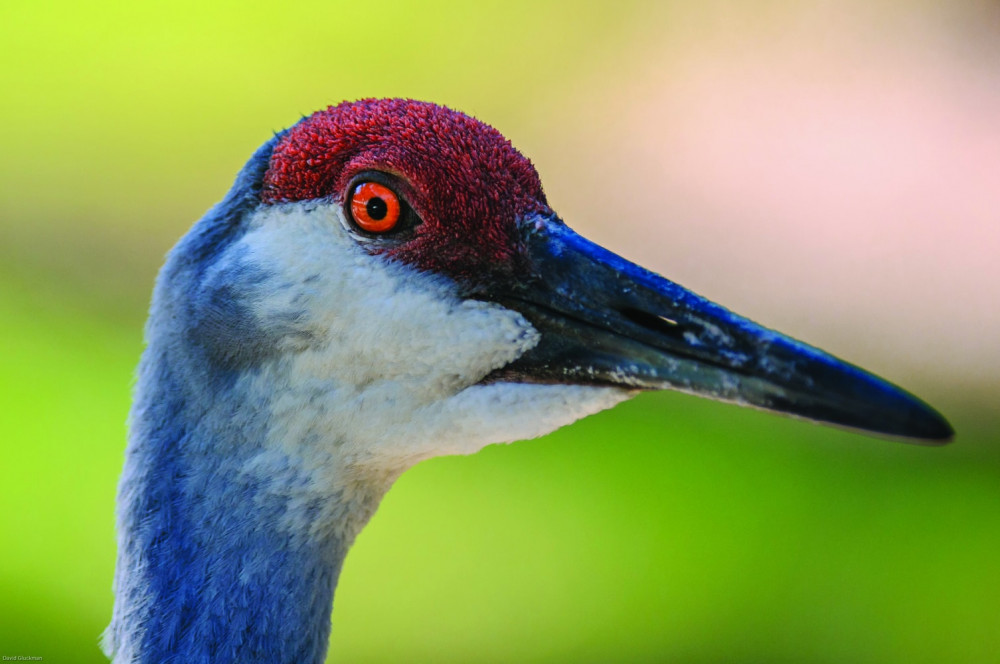 Sandhill Crane's large wingspan, typically 5.4 to 6.9 feet, makes this a very skilled soaring bird similar in style to hawks and eagles. Utilizing thermals to obtain lift, so they can stay aloft for many hours, requiring only occasional flapping of their wings and consequently expending little energy. With migratory flocks containing hundreds of birds, they can create clear outlines of the normally invisible rising columns of air (thermals) that they ride. The cranes fly south for the winter. In their wintering areas, they form flocks of over 10,000 birds. One place to observe this is a Bosque del Apache National Wildlife Refuge, 100 miles south of Albuquerque, New Mexico. There is an annual Sandhill Crane Festival in the winter months, there.

Sandhill Cranes are fairly social birds that are usually encountered in pairs or family groups throughout the year. During migration and winter, non-related cranes come together to form “survival groups” which forage and roost together. Such groups often congregate at migration and winter sites, sometimes resulting in thousands of cranes being found together.

They are quite catholic in diet but are mainly herbivorous, often eating various types of food based on availability. They often feed with their bills down to the ground as they root around for seeds and other foods in shallow wetlands with vegetation or various upland habitats. Cultivated foods such as corn, wheat, and sorghum are readily eaten and may support large numbers of cranes. Among northern races of Sandhill Cranes, the diet is most varied especially among breeding birds. Northern cranes and their offspring may variously feed on berries, small mammals, insects, snails, reptiles and amphibians.

Sandhill Cranes raise one brood per year. In non-migratory populations, egg-laying can begin as early as December or as late as August. In migratory populations, egg-laying usually begins between early April and late May. Both members of a breeding pair build the nest using plant material from the surrounding areas. Nest sites are usually in marshes, bogs, or swales, though cranes will nest on dry land. 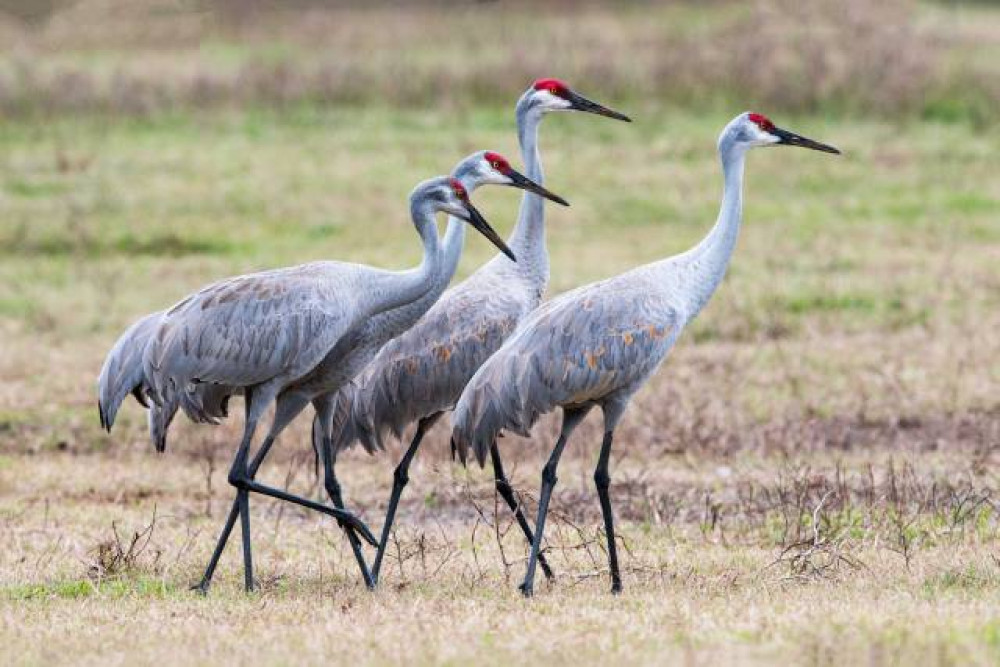 female lays 1 to 3 eggs that are oval-shaped and dull brown with reddish-brown markings. Both parents participate in incubation, which lasts 29 to 32 days. The chicks are precocial; they hatch covered in down, with their eyes open and are able to leave the nest within 24 hours of hatching. The parents brood the chicks for up to 3 weeks after hatching. They feed the young intensively for the first few weeks, and with decreasing frequency until they reach independence at 9 or 10 months old. Cranes that reach their independence are expected to live around 7 years, however, they can live to at least 21 years of age.

WHAT TO DO AT THE FESTIVAL

Guided tours to view the Festival’s namesake, the Sandhill crane, in the wild and tours highlighting the unique geology of eastern Washington are mainstays of the Festival each year. This year’s Festival will highlight presentations on a variety of Pacific and Inland Northwest wildlife, not only migratory and but also year-round residents. Photography, biotechnology, unmanned aerial systems (drones), and fire’s role in the ecosystem are also highlights of the 2020 Festival. 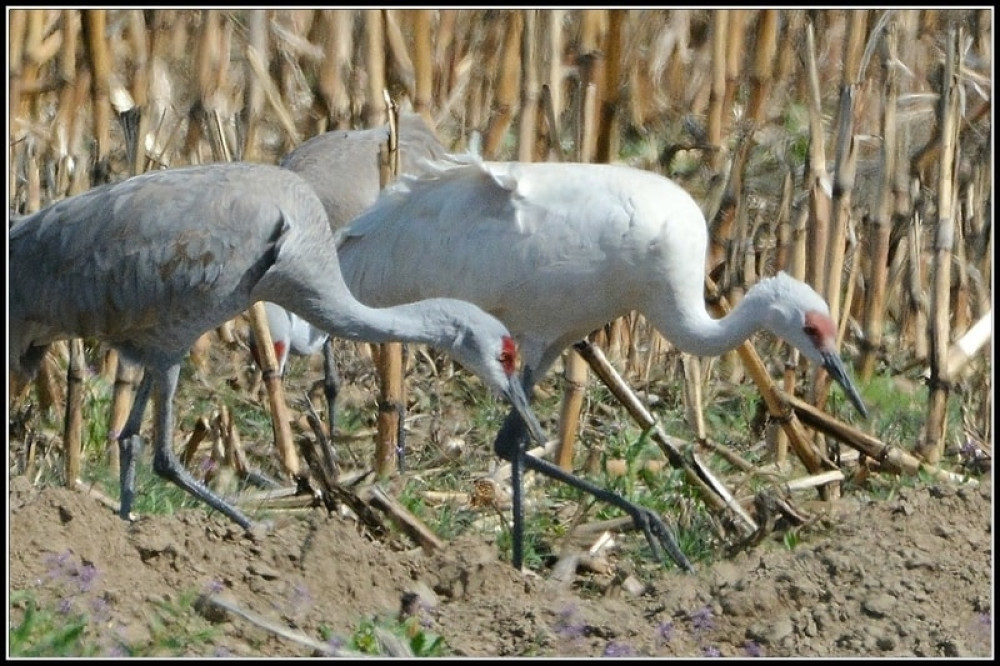 The Children Activities Committee will have fun activities for kids, such as faux binoculars to use for “birding” in the gym by finding pictures of various birds, origami folded crane mobiles, live ladybugs as an educational tool, mask making, and many other activities. As always, we will have a free photo booth to take your picture with a digitized Sandhill crane in the background to take home as a souvenir. 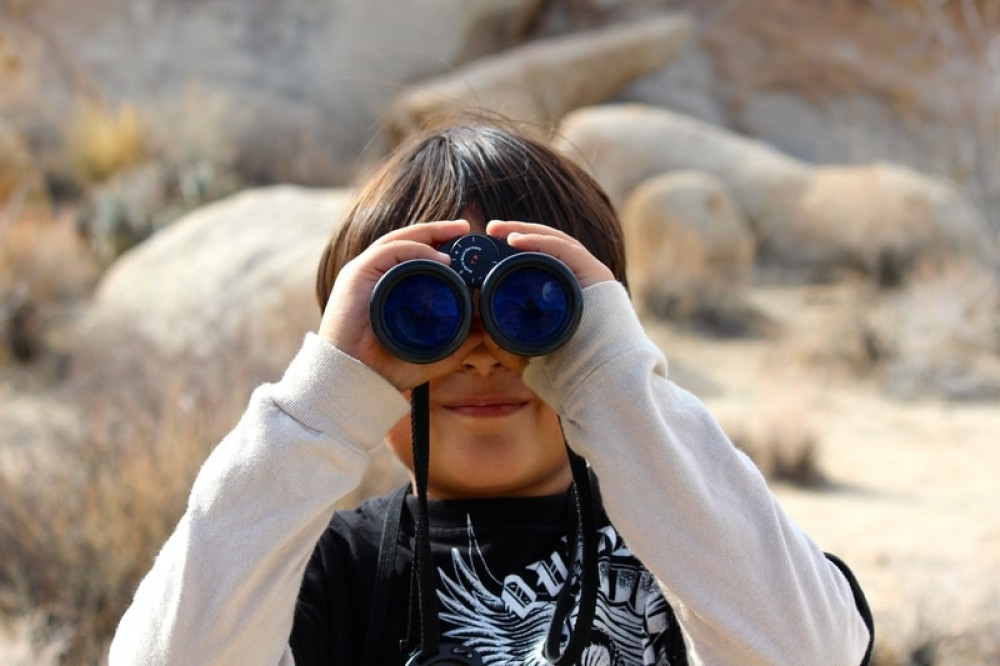 Best of all, a single general admission ticket ($5 for seniors, $10 for adults, children under 12 are free with a paid adult or senior) gets you into the Festival on Saturday and covers all lectures and events held at Othello High School, exclusive of viewing tours.

Lectures are offered only on Saturday, March 21, 2020. Friday evening and Sunday morning host tours only with the exception of a Friday night keynote address at Othello High School which is free to attend and open to all.