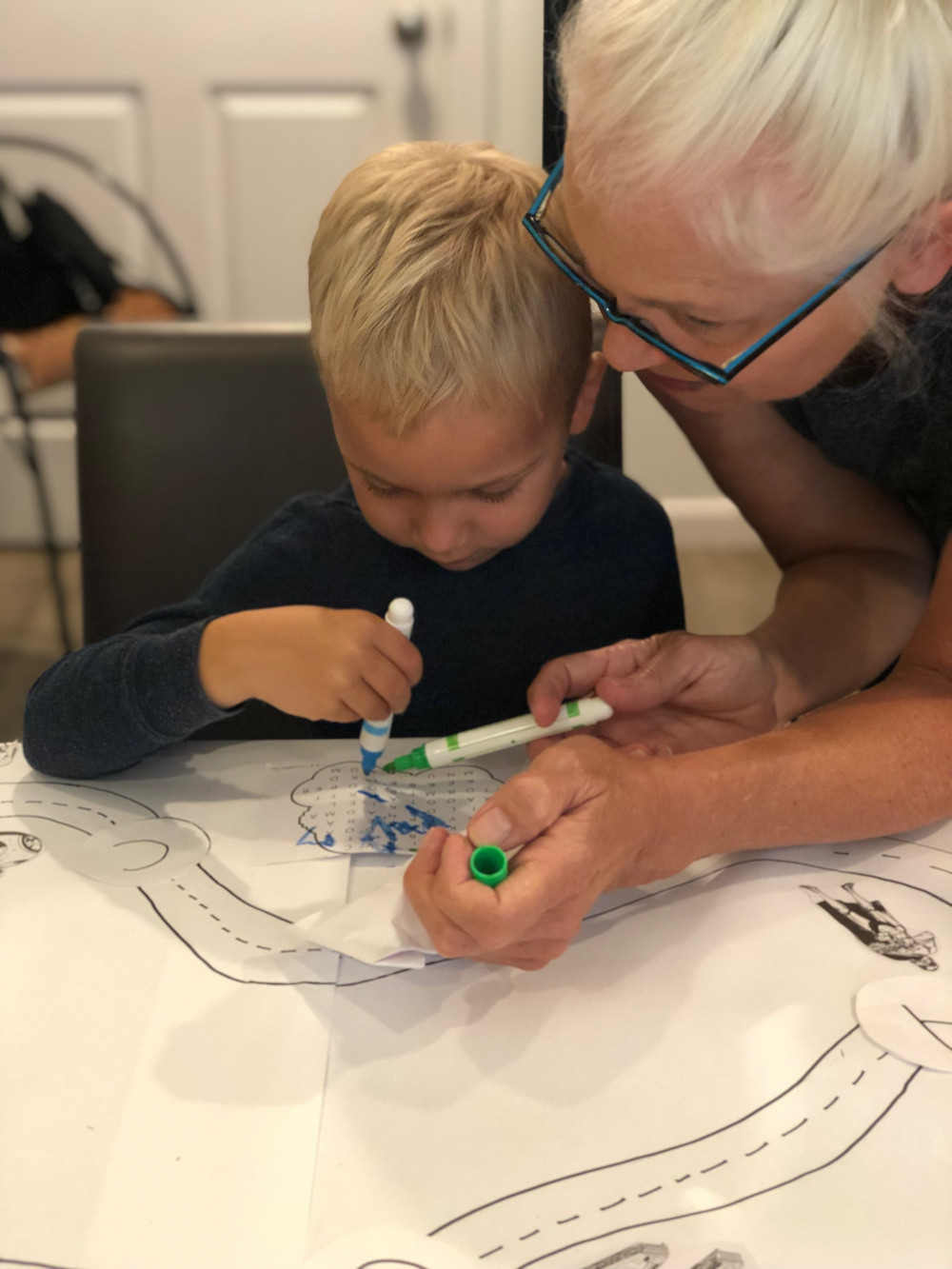 For Goodness Sake Posted on Mar 23, 2020 I woke up one day with an idea for creative time spent with my 4-year-old grandson. I wondered if he would like the idea that came to me and if he would even maybe look forward to it on a weekly basis? I hoped so.

Keeping it short and active was a key, I thought. An attention span of a 4-year-old is short but willing if one doesn’t push it. Keeping it simple and fun was another goal in my planning.

To get started nothing elaborate was needed. The most expensive supply was a roll of white paper to tape to a table to draw on. Other than that, colored markers, index cards to make my own flashcards of sorts, scissors, tape, glue, a few themed goodies, and imagination were all I needed.

Oh, yes, and a little (inexpensive) gift-wrapped prize to open when the lesson was successfully completed. 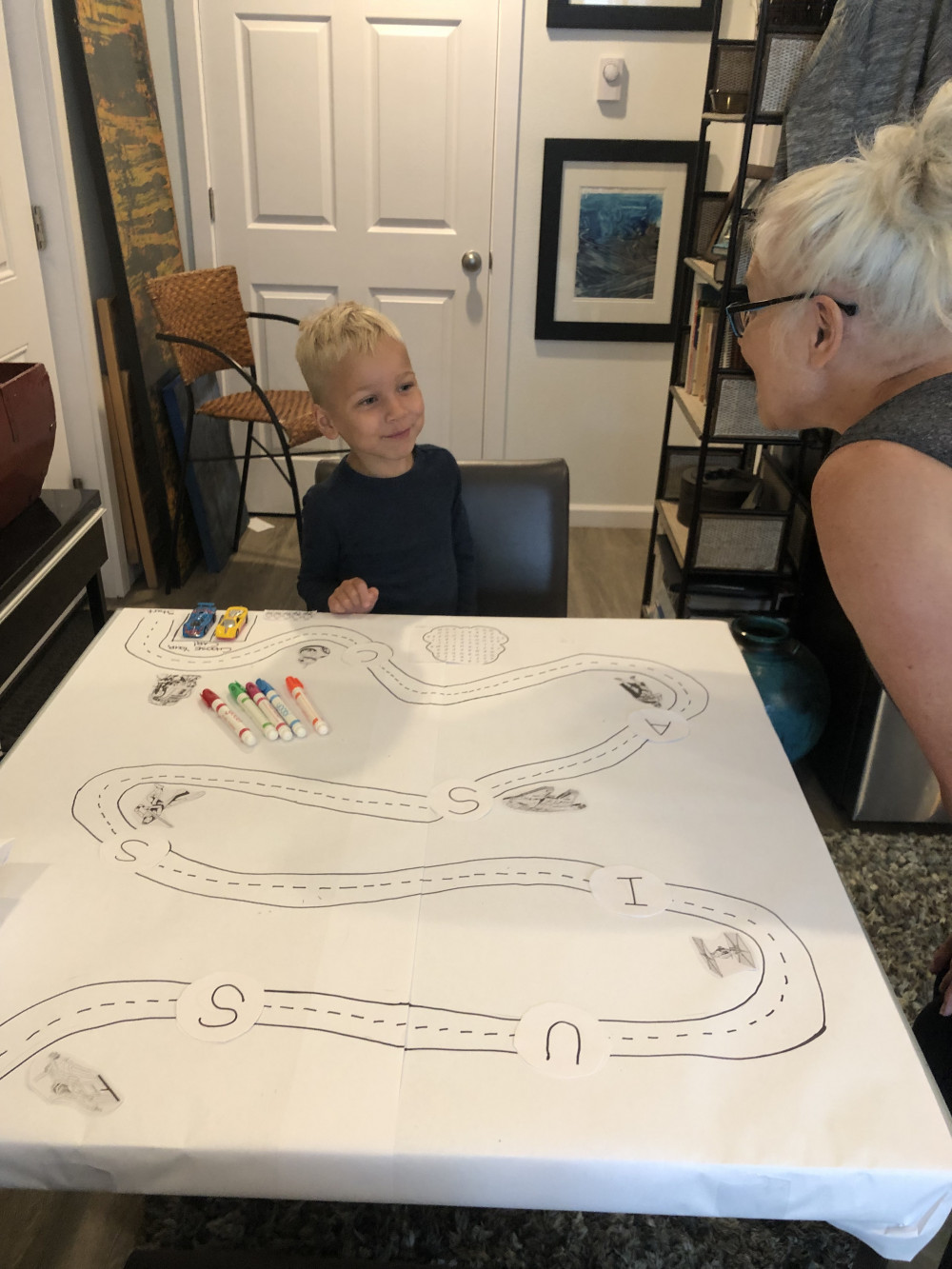 It was a race between my car and his. He got to pick his car. We raced as fast as we could to the first "letter" on the track. He would get there first, of course, and would announce the letter. It was a C. He was then asked to jump from his chair and look all over the house for a big letter C hiding somewhere. Once he found it we pasted it to a sheet of poster paper. We raced to the next letter. It was an A ....and he jumped from his chair to search for a big letter A somewhere in the house. (He giggled through this whole lesson.) Once the A was found, we repeated until all letters were found and pasted to the poster. Low and behold the letters together spelled his name! We practiced writing it a few times and DONE. Time to unwrap a little prize! 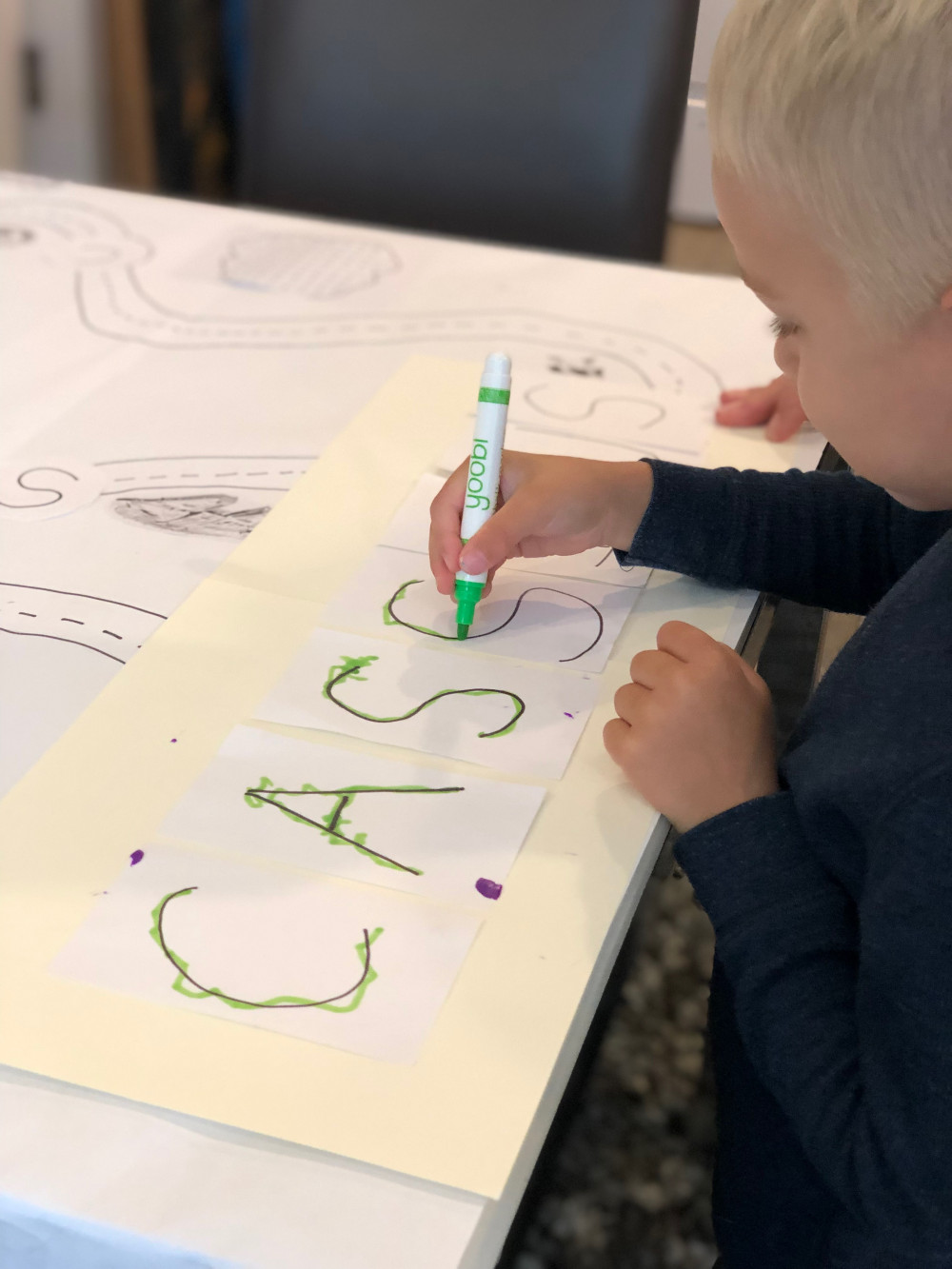 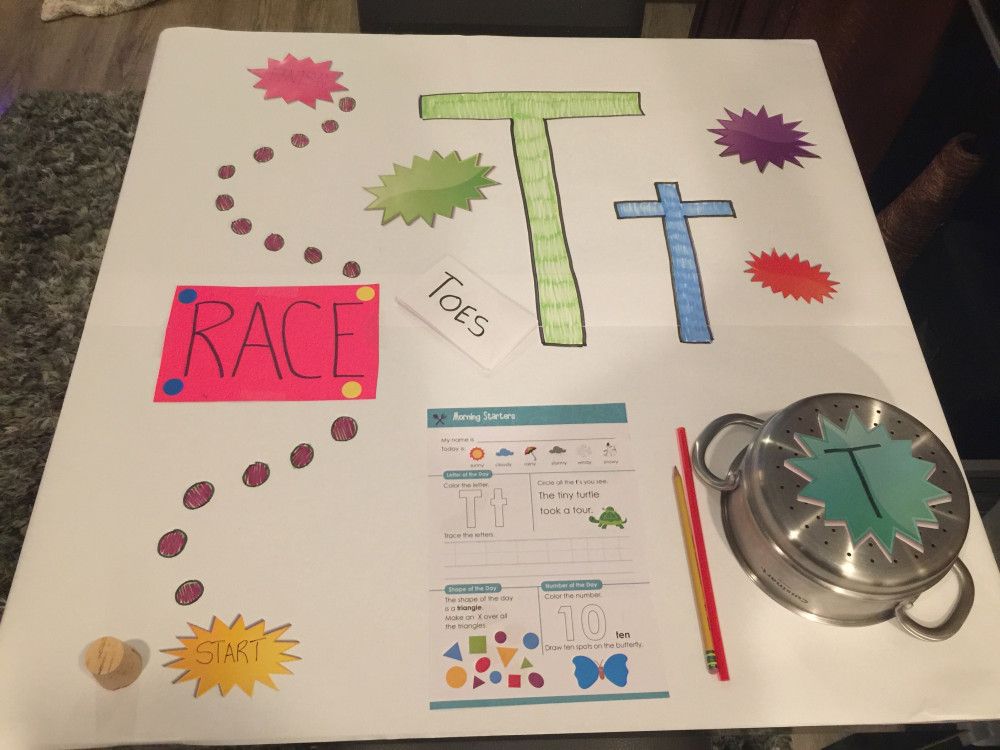 Let's race again! Everyone knows a 4-year-old boy LOVES to race everywhere, so here we go. This time we are focused on the letter T. We started by using the plastic straws as drum sticks on the pan to, well, just make a lot of noise. Then, as he closed his eyes to a count of ten, I covered the floor with words on index cards. Words, words everywhere. When he opened his eyes we started "the race". At the yellow START he moved a piece of cork up to the first dot. The race was to jump down off his chair and find a word that started with T, then back to his chair to move to the next dot. At every dot he would jump down to find another word starting with a T until he reached the FINISH! Time for a prize! 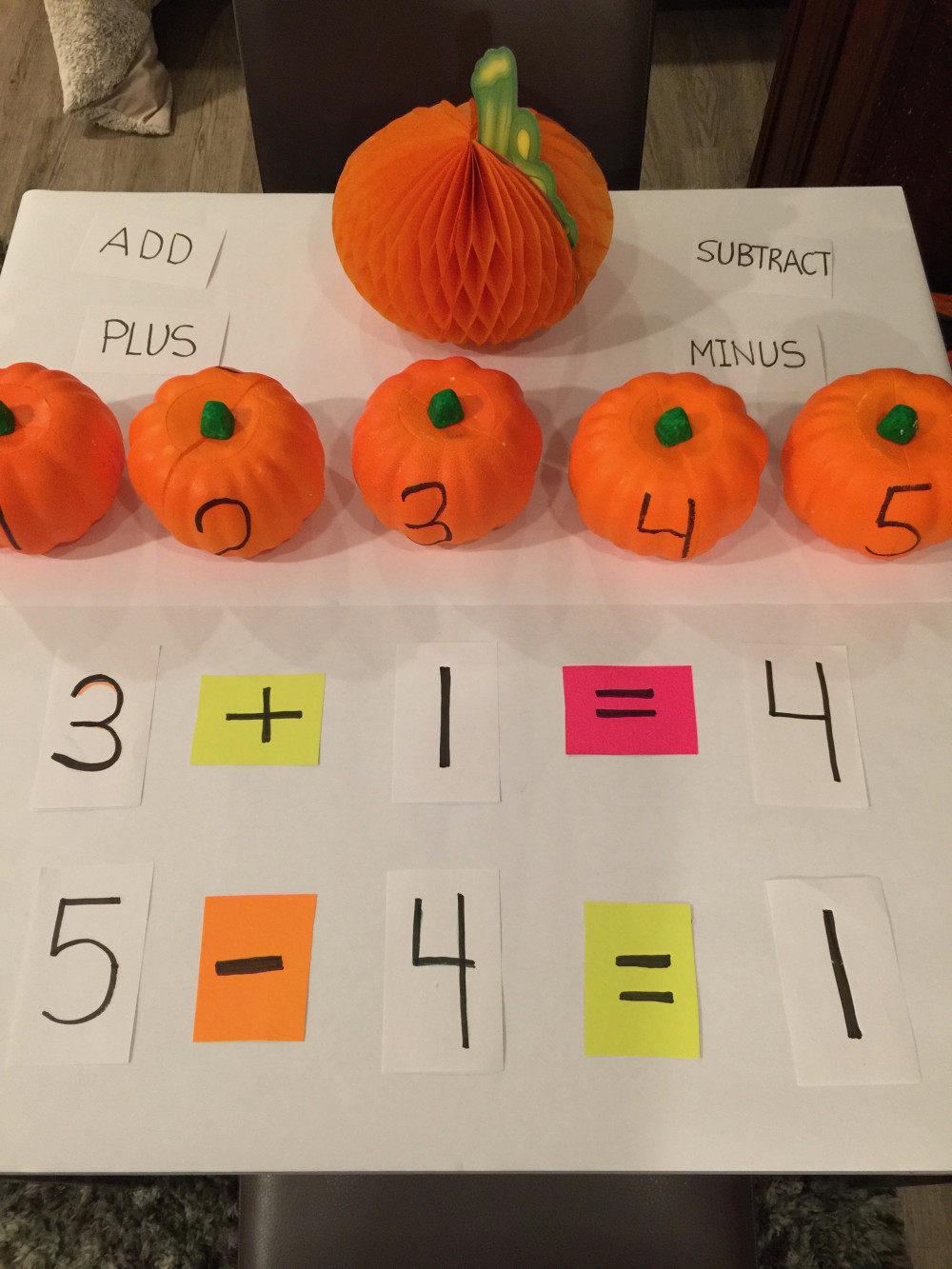 We started with a song found on a youtube channel for kids. The words repeated over and over and over... "Add means put together. Subtract means takeaway." So we did a session of exactly that. Using pumpkins, of course. Once the pumpkins were added and subtracted over and over, we called it good and opened the prize!

The next time...we counted balloons! 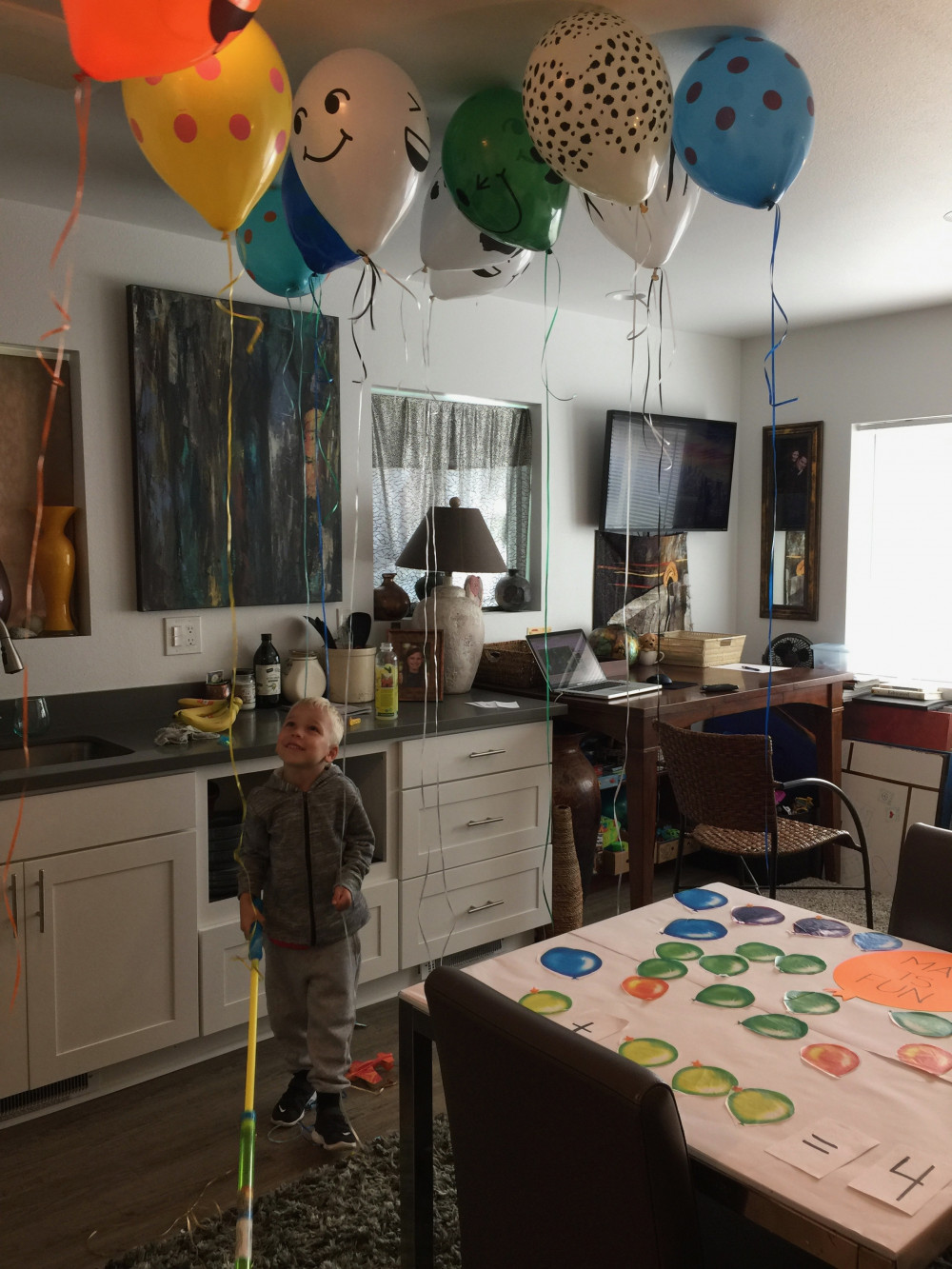 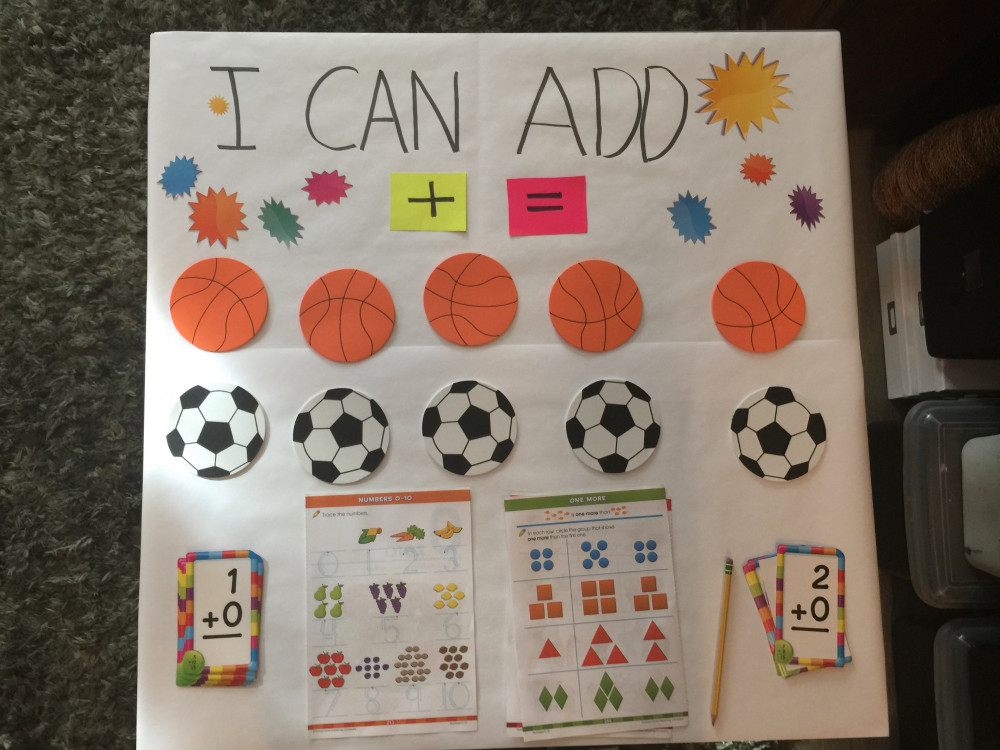 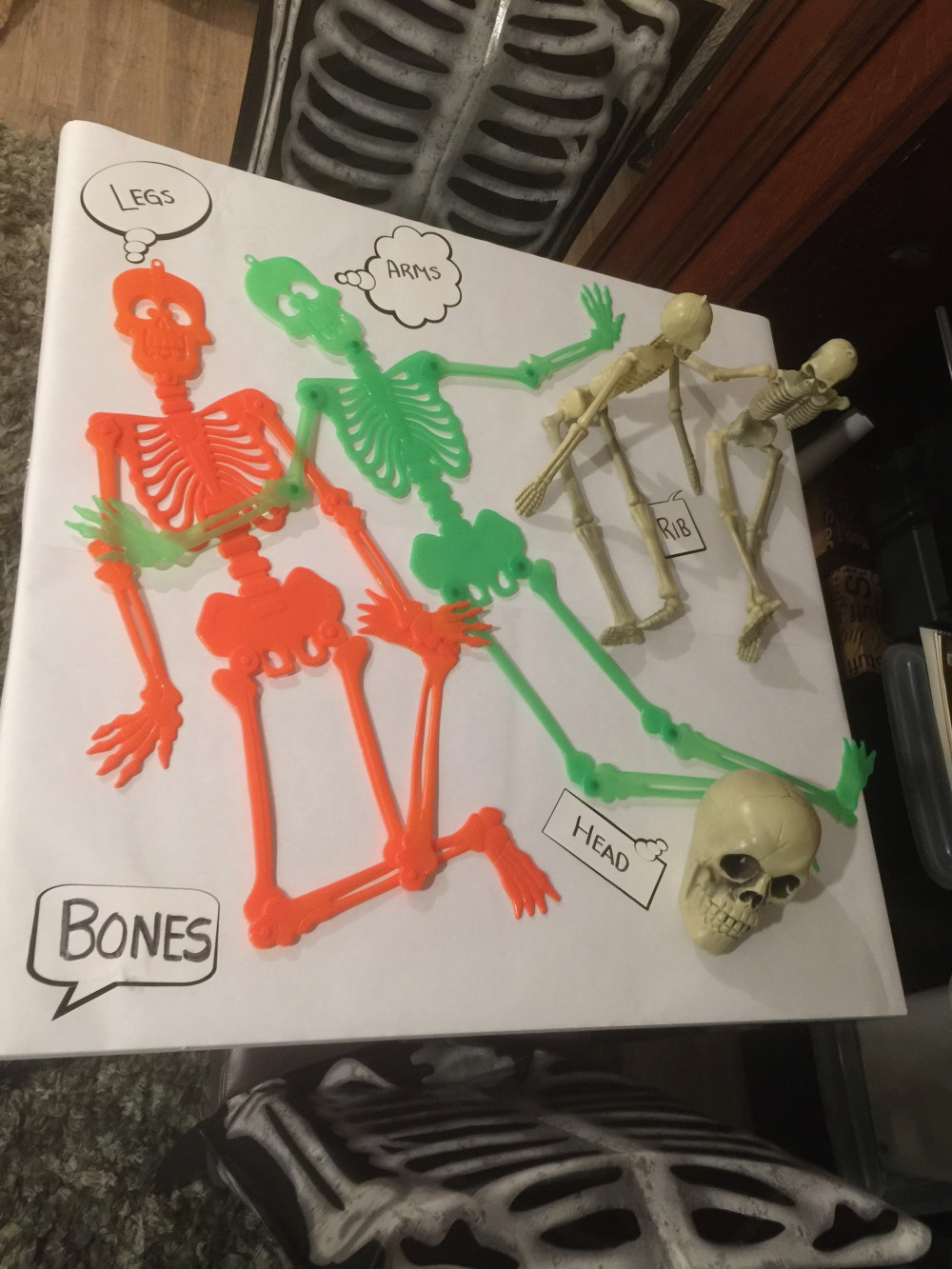 This lesson was a favorite and went on for several weeks. With the help of youtube videos and books from the library and a trip to the dollar store, I found all kinds of helps to learn the names of our large bones. It always surprises me when he uses the name of a bone in everyday talk. "Grandma, I hurt my femur on the playground." 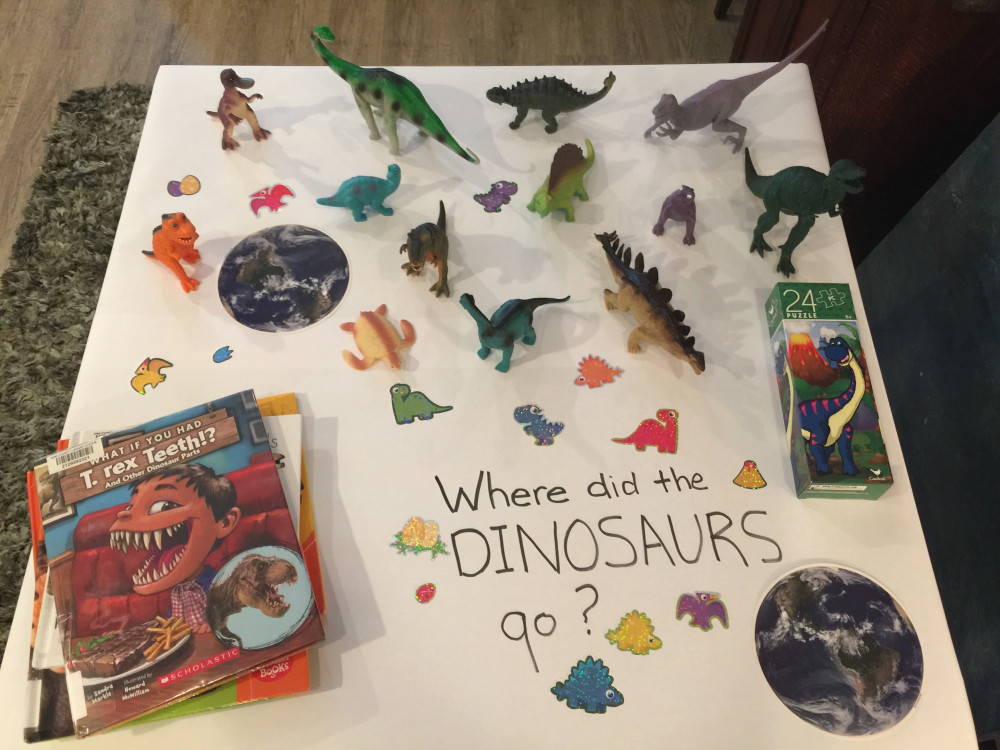 Dinosaurs are a favorite with preschoolers and to learn names and characteristics and facts are fascinating. Finding some fun library books and youtube videos was a must here. I learned, too. Time for a prize. 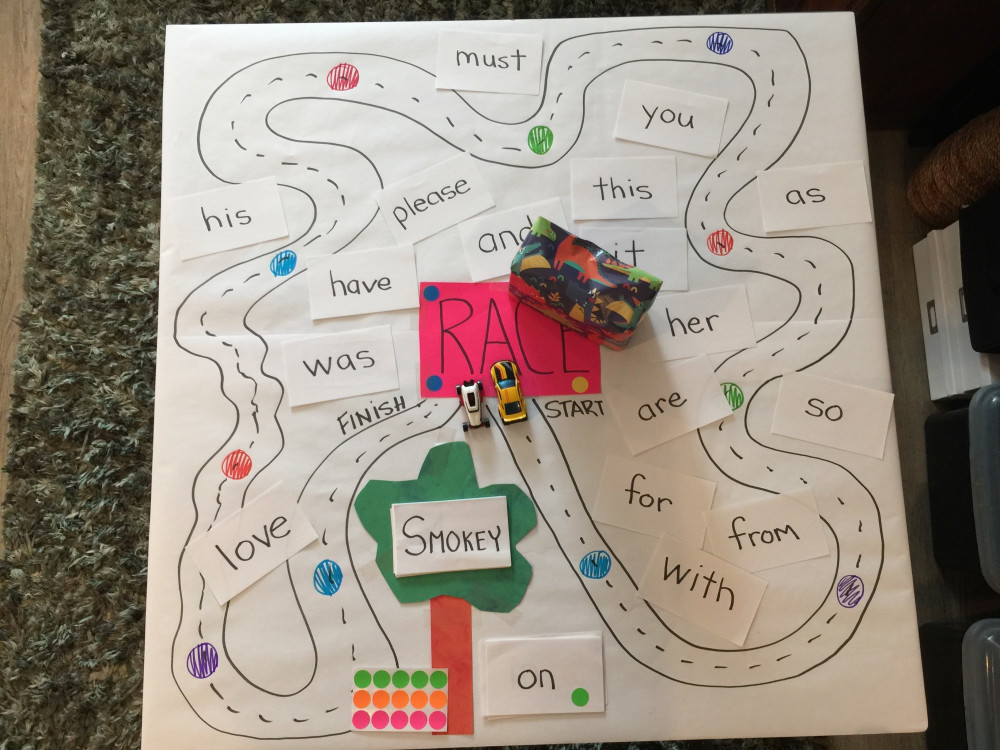 Sight words! Why not just go right ahead and memorize them now before school. So we have been practicing and now ready to race! Pick a car and go. I placed all the words on the floor. Each time he came to a colored dot I would read one of the sight words and he would jump from his chair and find it on the floor. Once he found it, he would race to the next colored dot and repeat. Made it to the FINISH. Time for a prize.

My daughter, Ashley and my grandson, Cassius

These learning lessons have been a special time together and looked forward to each week. By both of us. Now, my daughter pulls up, unbuckles him from his car seat and my grandson jumps out and runs to the door excited to find out what the learning lesson is. Oh, yes, the little gift-wrapped prize to open when the lesson is successfully completed? He zeros in on it as soon as he comes through the door and with the anticipation of unwrapping it he plops down in his learning chair to get to work.

We have both learned a lot.
View More Stories